Skip to content
I’ve always been a pink kind of girl but when browsing for themes for Mia’s nursery, I felt like it was too common and a bit more girly than what I wanted for her, I wanted something different, modern, nothing to do with that ”Pepto Bismol kind of pink”.
I would spend hours on Pinterest looking for ideas but I’m not going to lie everything is so freaking beautiful it could be quite overwhelming, nonetheless, is the best idea/inspiration source for ANYTHING period. Browsing through Pinterest I typed “grey with pink nursery” and I found THIS NURSERY it was like all heavens parted open and angels came down singing to me “this is the one”.  This nursery hit every point I was looking for, including the grey crib I wanted so bad, I was super excited. 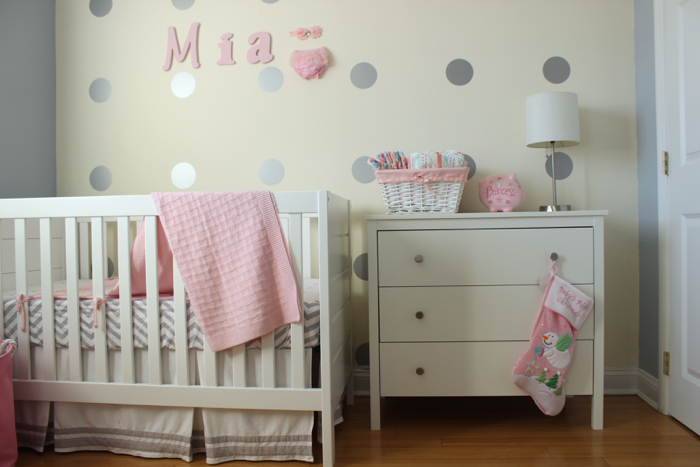 My nursery looks more minimalist and settled down because we went through hell and back (excuse the french) following my inspiration. Let me just get something out of my chest before we get started: 1. Nurseries are NOT easy or half as simple as they look. 2. They take a lot of work. Want me to be totally honest with you? Mia has not slept in it ONCE, she’s 17 months, I know, I know, I know. 3. Want me to be even more honest? Don’t fool yourself, nurseries are more for you than for the baby, she/he won’t know is she is sleeping in a box or in a beautifully designed work of art. With that out of the way it’s up to you to decide how much time, money and effort you want to put into YOUR nursery. I was a first time mom, so off course, people will say things in one ear and come out the other, just remember you do you!
Okay now, ready, set? here we go!
Things didn’t go as smooth as I thought they would and it all started with the gray crib I wanted so bad. They were all sold out for months, as a first time mom, I needed (wanted) the nursery to be ready before Mia came to this world. I didn’t only look online, I started calling every retailer to see if they had any in store, I was determined to find it, lastly, I reached a store in California and ordered my dreamed crib, finally! A couple of days later they called to cancel the order.
I forgot about the crib for a couple of days and went to the next step, paint and wall paper. That was struggle# 2. The paint described in the blog above looked too dark in person for our small room so I went for a “lighter grey” which ended up being more like a blue than a grey.
Struggle# 3. Wall paper. I’ll have whole other post about that because well, it’s too long for this one. Just know that this polka dots are DIY by yours truly, I’ll tell you how later in another post. 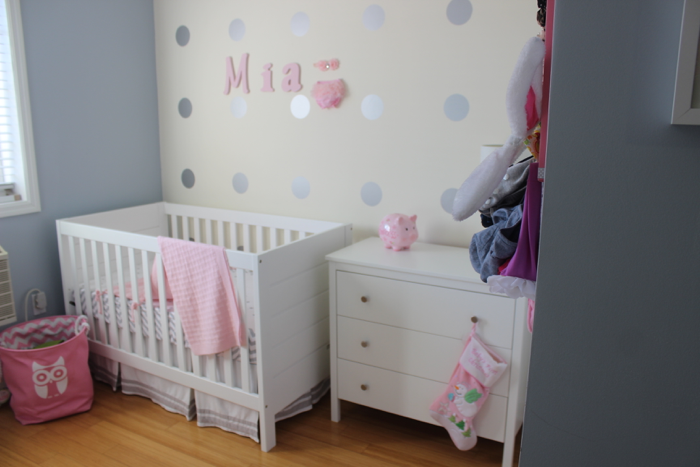 Back to the crib situation, desperation got to me and I ended up going for a white crib instead of the grey. The matching dresser is from Ikea, I changed the drawer knobs to silver ones to give it a more “expensive” look. 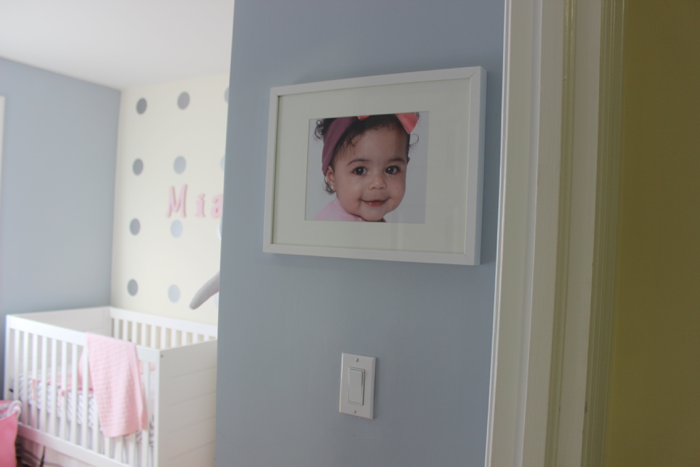 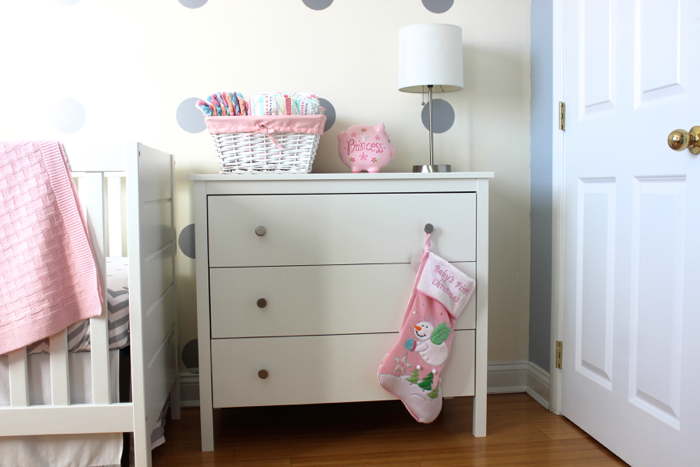 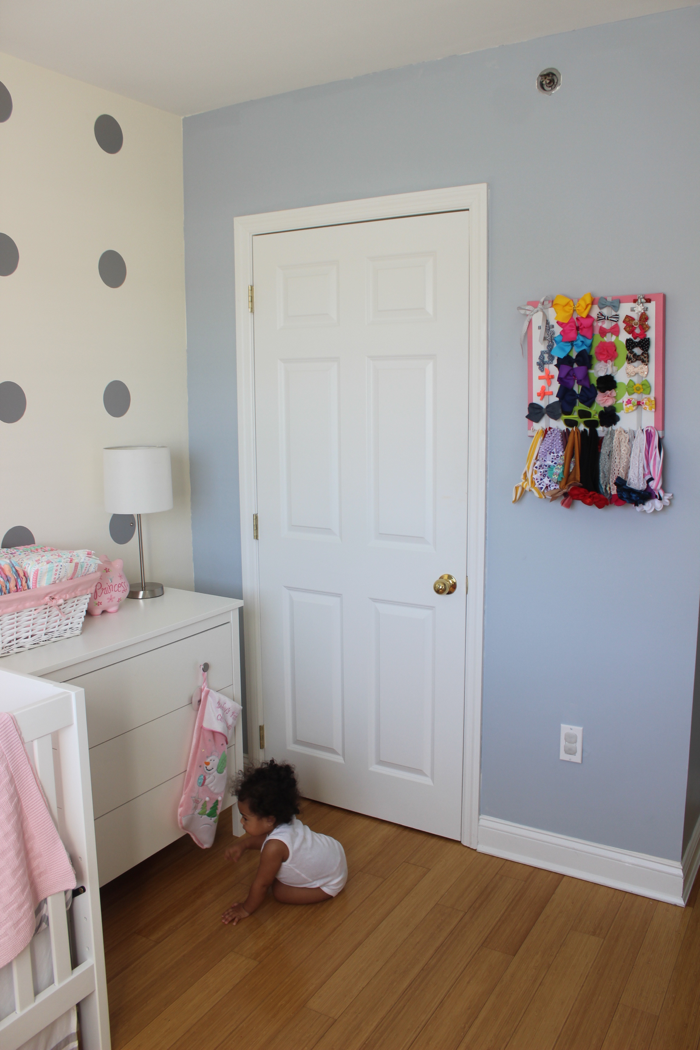 The bow/headband holder I made myself, more on that later 🙂 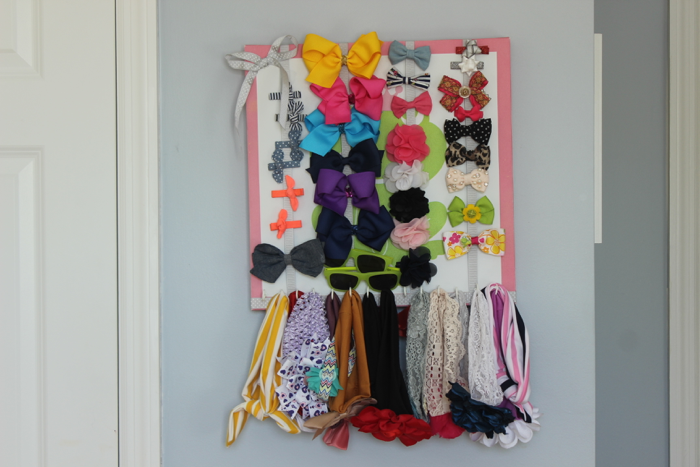 Struggle# 4. I bought the shelves, at Ikea too, but my husband said we were drilling too many things into the walls and since we are renting at the moment it was going to be an inconvenience later on, so no shelves. I glued her name to the wall instead.
Fun fact: the ruffle shorts and headband next to her name she wore for her first ever photo shoot! awwww ok let me stop. 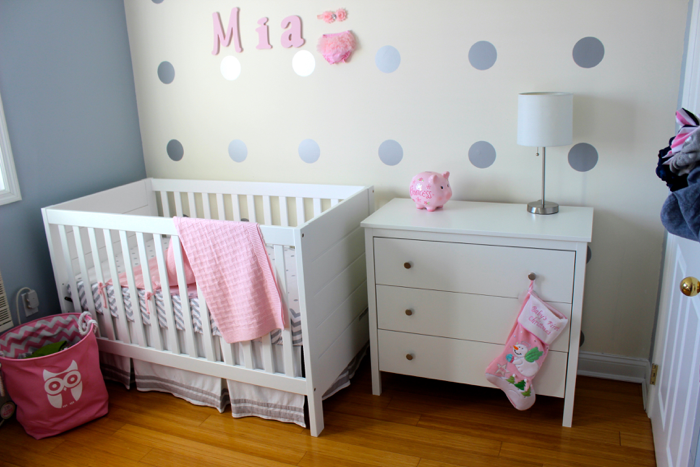 With everything being such a hassle to make her nursery look like my inspiration I had to stop to say to myself “Okay this is just an INSPIRATION, it does not have to be the same”.
Mia got her one of a kind, made with much love just for her.

Thank you for reading and coming by, Shey!

Today was an amazing day celebrating the opening o

I ADORED my look for last night’s runway 😍 I

Are over the knee boots still even in? 🤪 #shey

My love language is tacos and mimosas 😅